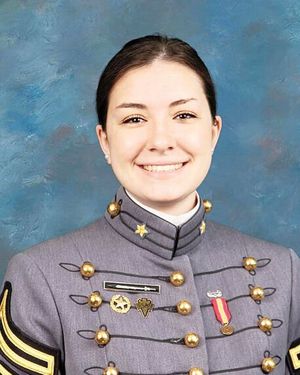 <p><p>Holland Pratt is both a soldier and a scholar, and among the best of her generation at both.</p></p><p><p> The Liberty Lake woman was named the <a href=”https://www.spokesman.com/stories/2021/aug/10/liberty-lake-woman-is-west-points-top-cadet” target=”_blank”>top cadet</a> at West Point earlier this year. And this week Pratt was named a Rhodes Scholar, one of the most prestigious academic awards in the world.</p></p><p><p>As one of 32 Rhodes Scholars chosen this year from the United States, Pratt will study next year at Oxford University in Great Britain. She will pursue master of science degrees in two distinct fields: Global Governance and Diplomacy, and Refugee and Forced Migration Studies.</p></p><p><p>“We are beyond proud and very excited,” her mother, Sarah Pratt, said Monday.</p></p><p><p>Holland Pratt, was unavailable for comment Monday because she was attending a vigil for a fellow cadet who recently died.</p></p><p><p>She entered the United States Military Academy after graduating from Central Valley High School in 2018. She has quickly risen through the ranks.</p></p><p><p>Pratt was named First Captain of the Corps of Cadets in August, following in the footsteps of Douglas MacArthur, William Westmoreland and other top American generals who held the same position. She is the seventh woman in the two-century history of West Point to carry the mantle of First Captain, leading the corps of 4,400 cadets.</p></p><p><p>She also excelled in the classroom.</p></p><p><p>Pratt won awards for academic research and performance, the Dean’s Pentathlete Award for five semesters for earning an “A” in every graded academic, military and physical event in one semester, and the Superintendent’s Award for Excellence for being in the top 5% of the class academically, militarily and physically.</p></p><p><p>A military history major with a Middle Eastern Regional Studies minor, Pratt said she was inspired by the suffering in the Holocaust. Her undergraduate research has focused on the coordination between military, civilian, and international organizations to prevent and respond to mass atrocities.</p></p><p><p>She recently developed a Myanmar Situation Assessment for the United States’ Indo-Pacific Command region. Holland also has begun to prepare for crisis prevention as a leader in West Point’s Mass Atrocity Prevention Practicum, a simulation experience focused on humanitarian crises.</p></p><p><p>Pratt intends to play a formative role in clarifying the military’s role in preventing and resolving mass atrocities by establishing a Standard Operating Procedure to clarify objectives and to identify ways and means among civilian agencies, the U.S. military, and allied forces in the international community.</p></p><p><p>She hopes to commission as an officer in the Armor Branch after leaving West Point.</p></p><p><p>Pratt intends to earn a master of science in Global Governance and Diplomacy and a master of science in Refugee and Forced Migration Studies from Oxford University as a Rhodes Scholar.</p></p><p><p>In her spare time, Holland is captain of the Army handball team, a perennial NCAA champion.</p></p><p><p>The American Rhodes Scholars were selected from a pool of 826 applicants who had been nominated by their colleges and universities.</p></p><p><p>The Rhodes Trust, a British charity established to honor the will and bequest of Cecil J. Rhodes, provides full financial support for Rhodes Scholars to pursue a degree or degrees at the University of Oxford in the United Kingdom.</p></p><p><p>Elliot F. Gerson, American Secretary of the Rhodes Trust, said the selection criteria included “first and fundamentally, academic excellence.”</p></p><p><p>In addition, Gerson said, “a Rhodes Scholar should also have great ambition for social impact, and an uncommon ability to work with others to achieve one’s goals. They should be committed to make a strong difference for good in the world, be concerned for the welfare of others, and be acutely conscious of inequities.”</p></p><p><p>Rhodes Scholars are chosen in a two-stage process. First, applicants must be endorsed by their college or university. This year more than 2,300 students began the application process.</p></p><p><p>The class includes 22 women, the most ever elected in a year, and has winners from 24 different colleges and universities.</p></p><p><p>The total value of the scholarship averages approximately $75,000 per year, and up to as much as approximately $250,000 for Scholars who remain at Oxford for four years in certain departments.</p></p><p><p>The selection caps a remarkable year for Pratt, who attended Liberty Lake Elementary School, Greenacres Middle School and Central Valley.</p></p><p><p>As First Captain, she is responsible for the overall performance of about 4,400 cadets by implementing a class schedule and acting as a liaison between the Corps of Cadets and the academy’s administration.</p></p><p><p>“Being named First Captain means for me an opportunity to serve others to the best of my ability and pay tribute to the legacy of those mentors and friends who have helped me throughout my time at the academy,” Pratt said in a summer interview.</p></p>