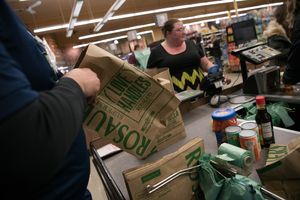 <p><p>Plastic bags are about to be out. Now shoppers have to choose: bring your own or pay extra.</p></p><p><p> Single-use plastics are the “most littered” in Washington, which prompted a new state law banning the ubiquitous bags at grocery and retail stores, said Dave Bennett, a spokesman for the state Department of Ecology. The ban begins Friday.</p></p><p><p>“Plastic bags are a major contaminant, which is why we don’t want them (stores) to try to recycle these bags or any kinds of plastic bags,” Bennett said.</p></p><p><p>For shoppers who forgot to bring their own reusable bags, stores are set to charge them.</p></p><p><p>Bags approved by the state – paper bags with 40% recycled material and thick plastic bags with 20% recycled material – will incur an 8-cent charge per bag for the customer.</p></p><p><p>The Legislature passed the <a href=”http://lawfilesext.leg.wa.gov/biennium/2019-20/Pdf/Bills/Session” target=”_blank”>plastic bag ban in 2020</a>.</p></p><p><p>Here’s what to expect as the ban takes effect.</p></p><p><h3>What does the ban apply to?</h3></p><p><p>The ban applies to food service businesses, restaurants, grocery and convenience stores, Bennett said. Vendors at festivals or farmers markets will also have to follow the ban.</p></p><p><p>Starting Friday, businesses may no longer provide single-use carry out bags. Instead, stores can order different types of bags, such as paper and thicker reusable plastic bags. Using these will incur a minimum 8-cent charge on the customer for each bag, and stores can choose to charge more.</p></p><p><p>Bennett said the large brown paper bags approved by the ecology department are tested to last at least 100 uses.</p></p><p><p>Any bag the customer brings in from home to reuse will not be charged, including the single-use bags.</p></p><p><p>“If they bring a single-use bag from their home to use on their own, that’s perfectly fine,” he said. “Reuse is certainly an awesome thing to strive for.”</p></p><p><h3>Are there any exemptions?</h3></p><p><p>Food banks and other government food assistance programs are not subject to the charge.</p></p><p><p>The 8 cents will not apply to anyone with a voucher or electronic benefits card issued under the Women, Infants, and Children or temporary assistance for needy families support programs, the federal Supplemental Nutrition Assistance Program (SNAP, also known as basic food) or the Washington state food assistance program.</p></p><p><p>Bags from food pantries and banks must comply with the part of the law that requires paper bags to contain at least 40% recycled material or 20% if made from film plastic.</p></p><p><p>The law also does not ban all single-use plastic from stores.</p></p><p><p>Prepackaged plastic such as sandwich or trash bags will not incur the 8-cent charge. Plastic wrap for meat packaging also will not apply.</p></p><p><p>Bags used to wrap newspapers and dry cleaning are exempt, as are the smaller prescription bags used by pharmacies, Bennett said.</p></p><p><p>An exemption applies for plastic around items where dampness could be an issue; for example, customers will not be charged for the plastic around flowers, frozen foods and potted plants, according to the bill’s text.</p></p><p><p>Bags approved for carryout include the following:</p></p><p><p>Large brown paper bags, which will cost 8 cents, must contain 40% recycled material and meet <a href=”https://apps.leg.wa.gov/WAC/default.aspx?cite=173-350-220″ target=”_blank”>state composting requirements</a></p></p><p><ul><li>Thick reusable plastic carryout bags, also 8 cents, must contain 20% recycled material, be 2.25 mil thick and cannot contain the words “degradable,” “biodegradable” or “compostable”</li><li>Small brown paper bags, for which stores can charge customers</li><li>Clear plastic produce bags, no charge</li><li>Reusable, customer-owned bags</li></ul></p><p><h3>Where does the 8 cents go?</h3></p><p><p>Stores that purchase the approved carryout bags will take the 8 cents to offset the costs of buying the thicker, more durable and “more expensive” bags.</p></p><p><p>“The charge is not a tax, it’s a sale,” Bennett said.</p></p><p><h3>What will happen to businesses that don’t comply?</h3></p><p><p>Ecology is leading enforcement on this <a href=”https://ecology.wa.gov/Waste-Toxics/Reducing-recycling-waste/Waste-reduction-programs/Plastics/Plastic-bag-ban” target=”_blank”>new plastic bag ban</a>, Bennett said. The agency will rely on the public for reports of noncompliance, so Bennett said they focused on education and outreach.</p></p><p><p>The department also added a “grace period” that will linger after Friday to give stores time to transition away from plastic bags, Bennett said.</p></p><p><p>During this period, stores that purchased single-use carryout bags before Oct. 1 can and should still use them, Bennett said. However, after a reasonable amount of time, the department will follow up on calls about stores that don’t comply, which could end in a fine for the business.</p></p><p><p>“We want them to use up their single-use plastics. We don’t want them to go to waste … However, the grace period is not intended for businesses to go out and buy a bunch of single-use plastic bags,” Bennett said.</p></p><p><p>Bennett said the ecology department released an outreach kit in 17 languages with printable flyers and signs for businesses to place around the store, which is <a href=”https://ecology.wa.gov/Special-Pages/Bag-ban-toolkit” target=”_blank”>available on the department’s plastic ban webpage</a>.</p></p><p><h3>Why ban plastic bags?</h3></p><p><p>After China announced in 2017 it would no longer accept single-use plastic imports, the global recycling system was plunged into “crisis,” Bennett said. China at one point had been the largest importer of single-use plastic, <a href=”https://www.ncbi.nlm.nih.gov/pmc/articles/PMC6010324″ target=”_blank”>according to data from a 2018 study in Science Advances</a>.</p></p><p><p>“That pretty much eliminated the final destinations of single-use plastic, so now we’re looking for ways to deal with it here on our own,” Bennett said.</p></p><p><p>In Washington, 39 cities and counties had local ordinances in place similar to the new statewide ban, including Seattle, Tacoma, Olympia and Gig Harbor.</p></p><p><p>People in the state use about 2 billion plastic bags per year. Single-use plastic makes up 61% of beach litter, according to a 2018 Science Advances study.</p></p><p><p><a href=”https://www.oregon.gov/deq/FilterDocs/BagFAQ.pdf” target=”_blank”>Oregon passed a ban on plastic bags in 2019</a>. Other states that also have bans on single-use plastic include California, Connecticut, Delaware, Hawaii, Maine, New Jersey, New York and Vermont.</p></p>