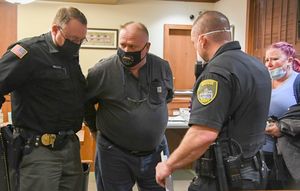 <p><p>A Spokane County jury convicted David Pettis on Monday of murdering his wife , finding that he laced her ice cream with a lethal dose of hydrocodone. </p></p><p><p>Doctors were unable to tell jurors during testimony how many pills Pettis ground up and mixed into a bowl of ice cream he gave to his wife Peggy Pettis, 64, on June 25, 2018.</p></p><p><p>However, the amount of pain medication was about 10 times what is considered a “therapeutic amount.”</p></p><p><p>Prosecutors said money and a rekindled love interest with a former girlfriend motivated Pettis to kill his wife. They presented jurors with proof of new life insurance policies taken on Peggy Pettis.</p></p><p><p>David Pettis, 60, leaned forward and bowed his head as soon as the verdict was read by Spokane County Superior Court Judge Michael Price. After the hearing ended, Pettis’ daughter, Elizabeth Culp, tearfully ran up to hug her father before he was taken into custody.</p></p><p><p>“I know my dad didn’t kill her,” Culp said through tears outside of court while clutching her father’s cane.</p></p><p><p>The Pettis family has been divided throughout the trial with Culp standing by her father while her brother, David Pettis Jr., testified he believed his father had something to do with his mother’s death.</p></p><p><p>Katreena Mabe, Peggy Pettis’ niece, made a statement for the family after the verdict.</p></p><p><p>“This is a very rough time for our family,” Mabe said. “Dave was a part of our family for 35 years. We are relieved that there is a resolution, and we hope that our family can go forward with healing.”</p></p><p><p>Mabe said no matter how the verdict came out the family knew it would be emotional, especially with the divisions in the family . Mabe said the family hopes for reconciliation.</p></p><p><p>“For the last three and a half years, our lives have been on hold,” Mabe said. “We finally feel like we can move forward.”</p></p><p><p>Pettis will be sentenced on the first-degree murder conviction early next year.</p></p>

← OSHA investigating Amazon warehouse collapse in Illinois
MLS or USL? Decision on professional soccer is up to the Spokane Public Facilities District →