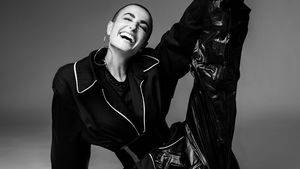 <p><p>After years of hearing “no,” one last visit to a modeling open call in Los Angeles changed Spokane-born Maya Samaha’s life forever.</p></p><p><p>“I knew I had what I had, and what I was capable of, so I didn’t give up,” she said.</p></p><p><p>So when, at first sight, her agent at Nous Management pointed right at her and said “Yes,” she was shocked. But not entirely.</p></p><p><p>“I started creating art at a very young age, pretty much since I can remember,” said Samaha, now 27. “I grew up in a dance studio. My grandma was a painter, my mom is extremely musically, creatively and physically talented. … I get a lot of who I am today from that upbringing.”</p></p><p><p>Her latest breakthrough is being cast as <a href=”https://www.youtube.com/watch?v=x7SRqkIr9QY” target=”_blank”>Cleopatra in a new Amazon Prime</a> advertising campaign.</p></p><p><p>Samaha went to a local Catholic school and then graduated from Mead High School.</p></p><p><p>With the natural physical awareness of a competitive athlete and dancer, modeling came naturally to Samaha. </p></p><p><p>“I’ve known from a young age I was an artist and performer,” she said. “I enjoy being able to tell a story with <a href=”https://mayasamaha.com” target=”_blank”>my body, face, the clothes I’m wearing</a> and to represent other people like me.”</p></p><p><p>Growing up in Spokane taking dance and art classes, Samaha said she realized early on that she would never find the kind of fulfillment needed from a traditional office job in her hometown.</p></p><p><p>“I knew I wasn’t going to go to college; school was never my thing,” she said. “I wanted to be creative for a living.”</p></p><p><p>Pursuing a more creative career was never going to be easy. It would mean leaving home and striking out on her own.</p></p><p><p>“It sounds scary and difficult. And it is. But in order to create for a living, you need to be in an environment where there is opportunity,” she said.</p></p><p><p>She knew that if she had any hope of realizing her dreams and finding the living space she so desperately desired, she would have to try.</p></p><p><p>And those dreams did not include staying in Spokane. Samaha identifies with the queer community and uses she/they pronouns.</p></p><p><p>“I had a hard time growing up there for many different reasons,” she said, explaining how she never quite felt safe or free to be herself in middle and high school. “It was very confusing for me to grow up there. … I was constantly fighting with my identity.”</p></p><p><p>So, at 18, with Los Angeles in her sights, Samaha left home for Seattle and – hardly one to second guess herself – hasn’t looked back.</p></p><p><p>“I’ve been in L.A. for three years now … but Seattle was a great steppingstone to get here,” Samaha said.</p></p><p><p>Adjusting to life alone wasn’t easy. But her studies in cosmetology school gave her the skills to express herself and establish a stable income while her personal drive, along with support from friends and family, continued pushing her toward broader success.</p></p><p><p>“She’s a fighter,” said Samaha’s mother and longtime dance instructor, Rachel Samaha. “She pushes, she has vision … she goes out there and gets what she wants.”</p></p><p><p>Over the past couple of years, all of that fighting and pushing has paid off. Even and especially during the coronavirus pandemic.</p></p><p><p>“It has been exponential since then,” Maya Samaha said. She has worked on campaigns and collaborations with Nike, Target, Gap and H&amp;M. In August, she starred in the Amazon Prime commercial.</p></p><p><p>“I am doing the most, but at the end of the day, I am doing everything I love, so I am extremely grateful and happy to be here.”</p></p><p><p>Now at a point where she can actively pursue all her creative goals – photography, modeling, acting, visual art and, most recently, music video directing – she has to guard herself against burnout and make time for self-care.</p></p><p><p>In her downtime, she enjoys boogie boarding, roller skating, sleeping, eating, cooking and hanging out with friends. But when she needs an extra reset, traveling alone is her go-to.</p></p><p><p>Samaha considers modeling an art form in itself, as well as a vessel for her other creative endeavors, and constantly finds inspiration from a wide range of sources.</p></p><p><p>“What inspires me to create? Other people, women, the pain I experience, all of it,” she said. “I become inspired when I go through hardships and overcome them or when I take time to enjoy my life. Being present and watching other people do amazing things is always the best source of inspiration for me.”</p></p>